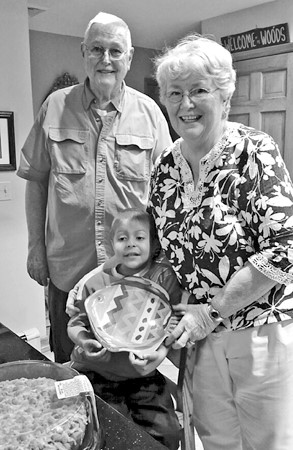 Thanks to the power of Facebook and a generous Shelter Island family, an eight-year-old suffering from cancer will get a chance to participate in a special camp on the Island.

Jesse Pallas, 8, of Miller Place will be at Camp Adventure when it opens August 15 at Camp Quinipet. The program hosts young cancer patients and their siblings for activities that enable them to put aside their cancer diagnoses and just be kids for a week.

Jesse has spent much of the last two years in and out of hospitals undergoing constant procedures to treat leukemia. He was able to attend the program last year because Jeanne and Ken Woods stepped forward to house the boy and his mom, Fariba.

This year, the Woods are hosting some Camp Adventure nurses.

This year, Linda and James Eklund responded to a Facebook post explaining the need for family that could host the boy and his mom, because Jesse is too ill to spend his overnights at camp.

Within minutes after the post, Ms. Eklund responded, then spoke with camp director Melissa Firmes-Ray for details and sealed the deal last week.

Ms. Firmes-Ray fought her own battle this year with acute myeloid leukemia, requiring a life-saving stem cell transplant she received last winter from a donor who was a stranger to her.

As she prepares for Camp Adventure and runs for one week, she’s also seeking hosts for three nurses and two doctors, each of whom needs a single night’s lodging.

Most staffers stay at Camp Quinipet, but to accommodate more children this year, the camp is seeking additional off-site staff housing. Staffers are volunteers who use their own vacation time to come out and serve the children.
Shelter Islanders have generously supported this program. Firefighters host a barbecue and other activities for campers and staff. The Shelter Island Emergency Medical Services is on alert if a child needs off-Island transportation for medical assistance and many individuals have provided support for the campers.

The camp program had been supported by the American Cancer Society for many years, but when they cut financial grants, Ms. Firmes-Ray and David Lewis were determined that Camp Adventure would survive. They rallied volunteers and formed a 501(c)3, creating Motivational Recovery Environments (MoRE) to provide tax exemptions to those contributing money to the program.

Besides the week on Shelter Island, the staff hosts activities during the year. Through other programs, such as the KidsNeedMore, The Hope For Jesse and Cassandra Steinle’s Legacy, families with children suffering from cancer have reached out to support one another.