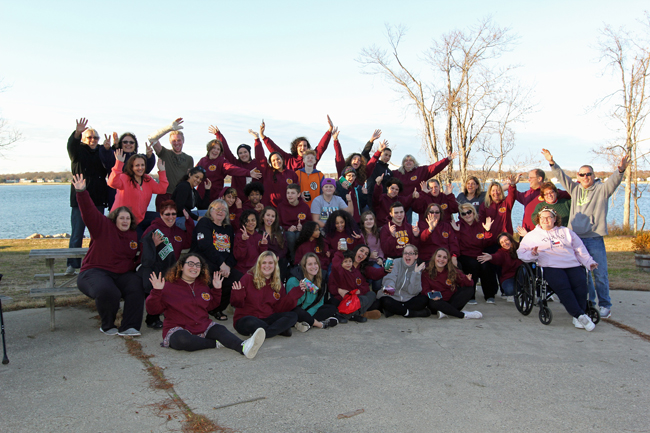 While the holidays can be a time for merriment and relaxation for many, some families with members who have cancer may find the fast pace anything but restorative.

That’s what brought 56 people — all involved with Kids Need MoRE — to Camp Quinipet this past weekend to participate in a their annual CampsGiving program of fun, relaxation and restoration.

Quinipet is the summer home of the Kids Need MoRE Camp Adventure for children with cancer and their siblings.

But it’s a long year between those August visits and and so Kids Need MoRE offers other programs to support one another during the year, according to Melissa Firmes-Ray, one of the founders of Kids Need MoRE.

Ms. Firmes-Ray was co-director of Camp Adventure when it was sponsored by the American Cancer Society, but when that organization had to cut back on its financial support, she and co-director David Lewis, a police officer and volunteer firefighter and EMT, joined forces to form the nonprofit Kids Need MoRE to keep the program afloat.

Those who participated this past weekend have had their lives touched by cancer — whether it was a child in the family who was the patient, a parent with cancer or those who have lost loved ones to the illness.

The Thanksgiving weekend was designed to offer time to just relax on Shelter Island as well as to participate in various activities, Ms. Firmes-Ray said.

One family participating this weekend was Tammy Malangone, 45, a mom with bone cancer, who was flown in from Albany with her young teenage children — Noah Mujalli, 14, and Lala Mujalli, 13 —through the Patient Airlift Services program.

They boarded an AAG/Sikorsky helicopter at Million Air – Albany International Airport to the East Hampton Airport Sound Aircraft area and were transported to Camp Quinipet.

“The helicopter trip was amazing,” Ms. Malangone said. “We were scared at first because we never flew before and the pilots were amazing. They reassured us everything would be okay and they answered all of our questions,” she said.

Patient Airlift Services is a nonprofit that arranges free flights through a volunteer network of private pilots who transport patients to hospitals for medical services as well as special events such as the CampsGiving program.

The Farmingdale-based office has arranged more than 11,000 such flights, according to marketing consultant Jackie Pecora.

Activities included ice breakers and team building exercises led by students from Stony Brook and Hunter College. There was a cupcake challenge to create the best desserts. Reiki, to reduce stress and encourage relaxation while promoting healing, was offered to participants.

There were also take home gifts provided by Jeanne Woods, a Shelter Islander who, with her husband Ken, were named last January as the Reporter’s People of the Year for their many volunteer efforts, including hosting patients and staff during previous Camp Adventure programs.

There were quiet moments around a campfire as attendees created bundles they burned in memory of those lost to cancer, supportive thoughts for those suffering from the disease and renewed dedication to better hopes for the future, Ms. Firmes-Ray said.

“It was a peaceful weekend of gratitude,” she said. Not only was the weekend a lot of fun, but it also afforded participants a chance to work with a social worker to discuss their hopes and their fears.

“I know it worked because I feel stronger than ever,” Ms. Firmes-Ray said.

She was stricken with acute myeloid leukemia in 2014 and required a life-saving bone marrow transplant, but is still being treated for rejection factors affecting her recovery.

“I’m not special because I do the work that I do,” she said at the time of her diagnosis. She admitted she wasn’t certain she could attend this year’s CampsGiving program because of her health, but said she ended up glad she had pushed herself to do so.

During the weekend, she walked further than she has in the past couple of years and while the weekend was tiring, she admitted it lifted her spirits as she’s sure it did for the other participants.