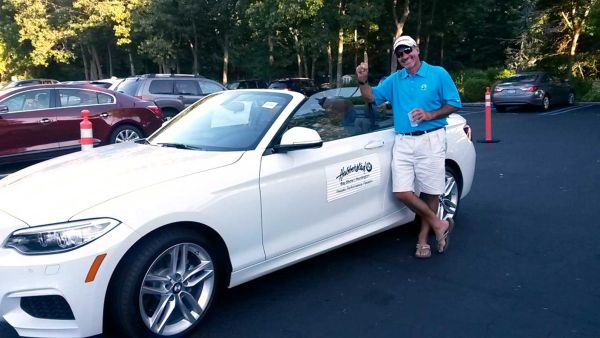 Frank Scordo, with the car that he turned down after making a hole-in-one recently.
Photo Credit: handout

Like everyone else who played in the charity golf outing for Camp Adventure recently, Frank Scordo of Syosset started dreaming when he saw the nice white BMW convertible near the tee. He had visions of driving along all summer with the top down and the wind in his hair. It was a tantalizing prize for anyone who could hit a hole-in-one on No. 17 at Rock Hill in Manorville.

A two-year lease was there for the taking with an ace. Scordo beat the odds and made the ace, from 175 yards with a 4-hybrid. He was overjoyed.

And he didn’t take the BMW. He chose a cash option instead, and pledged $10,000 on the spot to kidsneedmore.org, the group that ran the outing and runs several Camp Adventure locations for children with cancer.

“I don’t need another car,” Scordo said the other day from the Allstate agency he runs in Bayside, Queens. “And the charity needs the money.”

Scordo said he has been supporting Kids Need More even before the American Cancer Society could no longer afford to subsidize it two years ago and he will keep doing so. He intends to pay the taxes on the prize and keep some of the money. Mostly, he hopes people will follow his lead and make donations. He can live without the wind in his hair. “The camp,” he said, “gives kids a chance to get away for a week and have fun, and just be kids.”