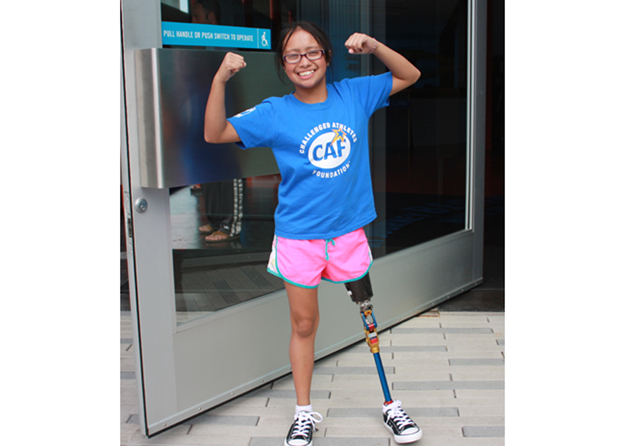 Brave Kaela Cruz will be at Shelter Island’s Camp Adventure this summer thanks to an invitation-only fund raiser held by Theresa Roemer in Houston, Texas, in November.

When Kaela Cruz, 12, of Sayerville, New Jersey, arrives at Camp Adventure on Shelter Island this summer, it will be because a woman in Texas who doesn’t know her had a heart large enough to reach out and help her.

Theresa Roemer, she of the famed 3,000 square foot closet replete with a champagne room and clothes, shoes, bags and accessories, ran a by-invitation-only fund raiser in November after hearing about the Island refuge that gives kids with cancer and their siblings an opportunity to spend a normal week at camp. I

Money is still flowing in from the fund raiser, so more children may benefit in adition to Kaela.

At 5, Kaela was diagnosed with bone cancer and has undergone an amputation of her left leg above the knee as a life-saving measure. She has been cancer free now for seven years and tells her story of survivorship to foundations in an effort to raise money to help other pediatric cancer patients.

While Kaela is cancer free today, during her own struggles she saw a lot of friends she gained during her hospitalizations succumb to cancer. That’s what drives her to try to help raise money to find a cure, according to her father, Matt Cruz.

Despite her amputation, she copes well and is a red belt in Taekwondo. She’s on a swim team with able-bodied kids, her dad said.

What’s particularly special to the organizers at Camp Adventure is that besides raising money, Ms. Roemer will be a staff volunteer this summer.

“I’m one of those people that’s not all about the check you can write, but donating your time,” she said in a telephone interview last week. She calls the donation of time “the holy grail,” adding, “Actions speak louder than words.”

Although Ms. Roemer is wealthy today, she grew up in a poor family and struggled with her own health problems that had her in and out of hospitals in Nebraska. That experience made her want to find a way to help others, she said.

Another inspiration for her was the death of her son. Getting involved with children’s needs has helped keep his memory alive, she said. It’s what got her involved with Child Legacy International and its work in Malawi and Zimbabwe in Africa. The group’s aim is to break the cycle of poverty starting with clean water and proper nutrition, medical care, education and training.

What will she be doing at Camp Adventure this summer?

Whatever they need, she said.