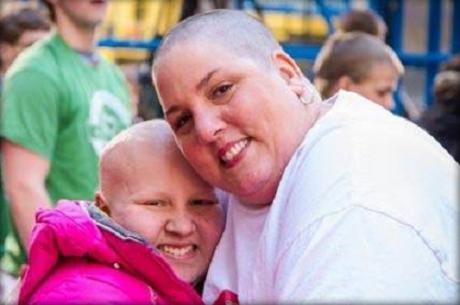 One Long Island girl hopes all maps lead Maroon 5 frontman Adam Levine to her Sweet 16 party – a celebration she was told she could never live to see.

Gina Mulieri, of Holbrook, has been battling brain cancer most of her life, and to mark her special birthday, all she really wants is Levine to be her date for the night.

The 15-year-old took to YouTube last month to invite the “Animals” and “Maps” signer to the bash.

“She loves Maroon 5,” her mother, Bonnie Mulieri, told FiOS1 News. “It’s her favorite band. She’s at that age where most girls are dreaming about this and that. She’s stuck in the house.”

The Sachem High School East student has been battling brain tumors since she was 7 years old, and has had five relapses since her diagnosis. Right now, she is tumor-free, her mother said.

“Our doctors told us she should never make it to high school,” Bonnie said.

Gina’s illness, medulloblastoma, is one of the most common malignant brain tumors in childhood, according to St. Jude Children’s Research Hospital. Between 250 and 500 children are found to have it each year in the U.S.

The idea for her Gina’s forthcoming Sweet 16 party came from Camp Adventure on Shelter Island – a place where children battling cancer, and their siblings, get a chance to act like normal kids. Gina has attended the camp for the past 8 years.

While sitting down to plan the party, the audacious teen said she wanted “People” magazine’s 2013 Sexiest Man as her “plus one.”

“We all laughed but then said ‘Alright, let’s try to do this,’” Bonnie explained.

Gina is only 4-feet, 8-inches tall but “it’s quite striking how bold she is,” the proud mom continued.

For example, even though Gina can never grow hair again, she quickly shot down the idea of ever wearing a wig.

“I’m bald and proud,” she told her mother.

“Gina is a very bright and bubbling personally. She has no filter,” Bonnie added.

Gina’s special day is March 27 at the Holbrook Country Club. So far, she hasn’t heard back from Levine.

But, there’s still hope. This past December, Levine and his band crashed several Los Angeles-area weddings for their new music video “Sugar.”

“I’ve got the venue, the dress; I even got my invitation to you, Adam Levine, to be my plus one,” Gina says in her video. “Have your people call my people.”